"Waiting to Hatch" is a storybook of the Land Before Time series. It was illustrated by Robert Sanford and Christopher Fowler, while the cover art was provided by Universal Studios Liscening Inc. In this story the original five Prehistoric Pals and Chomper find an egg and wonder what will hatch from it.

It is indicated to take place somewhere during The Land Before Time II: The Great Valley Adventure, as Chomper is shown to still be a baby. This is also supported by the fact that the characters know there are Egg Stealers in the valley.

At the beginning of the book Littlefoot points to a spot below a little hill and says "Let's build out fort right here,". Littlefoot explains that it will be easier to roll rocks down the hill than roll them up. His friend Petrie agrees, and so do his other friends Ducky, Spike, and Chomper. Even Cera has to admit that Littlefoot is smart for a Longneck. The five friends work all afternoon, gathering rocks of all shapes and sizes and putting them at the edge of the grassy slope. Between their puffing and grunting they shout "Look out below!" and the heavy rocks roll down. Littlefoot and Spike stay at the bottom of the hill, because it is their job to take the rocks after they roll to a stop next to a large tree, and push them into place. They make the fort bigger, taller, longer, and stronger.

Later, Littlefoot calls out to his friends that there are only a few rocks left to go until they finish their fort. Petrie is busy with a large speckled rock that he found lying in a soft, shady place under a bush. He puts all his weight against it with his back, and is surprised how easy it moves compared to the other rocks they have lugged around all day. Petrie starts to inspect the rock; it is smooth and warm to the touch, unlike the other rocks which have been cold and rough, Petrie thinks it's strange. He then says to his friends, "Look at MINE!". Petrie steps back from the blue and gray rock, he comments that it has speckles on it, and it is smooth like his beak. Ducky is very insterested in the rock, and thinks it's very pretty. She begs Petrie to let her touch it, which he does. Petrie is proud of the rock and doesn't think Ducky can hurt it just by touching it. Just as Ducky reaches for the stone though, something very strange happens; the rock moves.

It moves only very slightly; first to one side, then the other. Ducky, Chomper, Cera, and Petrie all see it though, and for a moment none of them move, breath, talk, or blink an eye. Cera then whispers to the others if they all saw it, and steps back a little. Petrie frightenedly gulps that it moved, not knowing what to think. Spike and Littlefoot then peer over the edge of the hill. Littlefoot impatiently asks them what they are waiting for, and tells them to hurry up, asking where the last rock is. Cera shakily tells him that they've got it, while not taking her eyes off the rock incase it rolls again in her direction. She studders while trying to explain the situation to Littlefoot, until he finally asks her what it is, and comes over to the rock himself. Petrie squeakly tells Littlefoot that the rock moved, and Ducky quickly runs up to Petrie and confirms that it did, and that she saw it too.

Cera huffs that they all saw it, not wanting to be left out of anything important. Petrie questions what type of rock moves by itself, and concludes that he doesn't know. He then begins to ask Cera, Ducky, and Littlefoot if they know, but getting no response from them, he angrily calls Littlefoot's name again, and asks if they are listening to him. Littlefoot is too busy watching Spike to hear anything though, who is going towards the egg. Littlefoot tells Spike to be careful, and that it might be dangerous. Spike doesn't seem afraid though, and sniffs and snorts the air while circling the rock, getting closer and closer to it. As everyone holds their breath, Spike reaches out and taps the side of it; nothing happens. Spike then taps the rock again a little harder, and to everyones surprise, the rock taps back. Cera screams, and Littlefoot yells "Look out!". They all skid and scramble away from the rock, certain somting awful is about to happen. Spike, however, carefully climbs on top of the rock and stretches himself out, covering the top and sides as much as he can with his stubby legs. All at once, Littlefoot knows what Spike had all along. He exclaims to Petrie that it isn't a rock, it's an egg.

Petrie excitedly says "Egg? Me find egg?". Suddenly, everyone is more curious then scared, and they croud around Spike to stare at the unusual sight. Spike begins to stare at the Big Circle, now low in the sky. It would be dark soon, and all the children know there are egg stealers in The Great Valley. Petrie asks what they will do with the egg for nighttime. Littlefoot smiles and says that lucky for them, they have a new secret hiding place; Cera agrees with him. Slowly and gently, they all help move the egg down the hill and into a safe place, just inside the fort. They then cover it with grass and ferns. Cera says that they'll meet back there in the morning, planning to be the first one to arrive. As much as they want to stay and make sure the egg is safe, the children know there parents were already expecting them home for dinner. Ducky says, "Goodnight, Eggedy Egg," before leaving the fort with the others.

As each of the friends sleep this night, they dream of what was growing and rolling and tapping back from inside the egg. The only one that doesn't dream, however, is Spike. He doesn't get even a wink of sleep this night, because he is too busy wishing and hoping for a little spike-tail to be in the egg, someone like himself. The next morning, the others race to be the first to get to the egg. They wonder if it hatched during the night, and what might've hatched from it. To their surprise, Spike was already there. However, Spike had been even more surprised because he wasn't even the first one there. Someone else had come during the night while the others were dreaming, and while Spike wished and hoped; it was someone who also wished and hoped. Someone who wanted a friend, just like Spike. Someone who looked like they'd be a good friend, just like Spike, and whose smile beamed so warm and bright, that when the baby spike-tail looked at Spike, and when Spike looked at him, neither of them needed words to say, "I'm so happy you're here!"

Many of the characters in this book have slight coloring differences compared to their colors in the films. 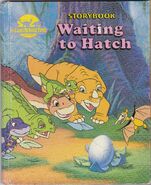 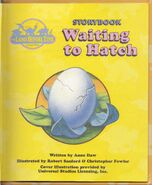 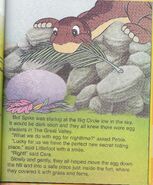 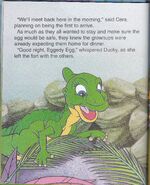 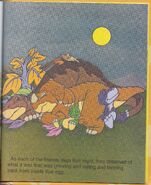 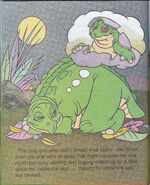 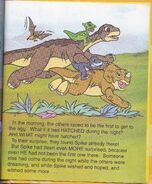 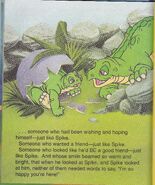 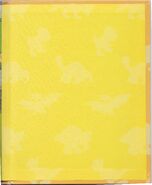 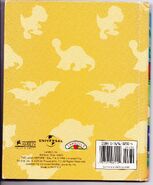 This article is a B-class article. You can help Land Before Time Wiki by giving it more of the necessary criteria.
Community content is available under CC-BY-SA unless otherwise noted.
Advertisement