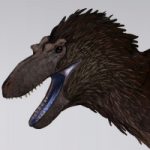 aka Nanotyrannus lancensis (call me Nano)

The Land Before Time XIII: The Wisdom of Friends

A bunch of imaginary cassowaries

The dude writing this

Myself and The Land Before Time series

One of my favorite traditionally animated films. Though not necessarily perfect (Petrie is a bit annoying, the narrator is mildly intrusive and the cutting of scenes is very noticeable in places), I still find it to be an incredible movie, and the only objectively good installment in the franchise. 9/10

The Land Before Time II: The Great Valley Adventure

Chomper is okay and his parents and the Struthiomimus brothers are entertaining, but beyond those aspects of the movie, II is slow, monotonous, and boring, without a single ounce of charm. 2.5/10; the only things keeping this from being lower are the aforementioned things I liked.

The Land Before Time III: The Time of the Great Giving

I think that III is a significant improvement over II, thanks to its darker plot, amusing sorta-villains, and nice climax; I also think its pacing is, though slow, much faster than last time, and has a bit more charm to it. 6/10

The Land Before Time IV: Journey through the Mists

In my opinion, the strongest of the sequels. It has better pacing than its predecessor, it has nice songs, interesting new characters, and one of the more serious plots post-original to make up for that; the biggest problem with IV is its antagonists, Ichy and Dil, who I find to be more annoying than funny. 7/10

The Land Before Time V: The Mysterious Island

Contains by and large the greatest of the sequel sharpteeth, a decent plot, and some nice scenes (the 'Always There' number, the shark/log scene, pretty much everything with the aforementioned sharptooth). Not too fond of any of the songs aside from 'Always There', and not a huge fan of the reappearing Chomper spontaneously getting a speaking role. Otherwise, I think it's pretty okay. 6.25/10

The Land Before Time VI: The Secret of Saurus Rock

For the most part, I found VI to just be lame; it's boring, not very fast-paced, plagued by stupid conflict (bad luck? really?), and topped off by two of the most annoying characters in the series; however, the climax is one of the worst in the series, and left a sour taste in my mouth by the time the movie had ended. 3/10

The Land Before Time VII: The Stone of Cold Fire

Probably the most complex of the sequels, with a very interesting main antagonist and some entertaining proper villains, a decent plot, and some nice songs. Just a hair weaker than IV, because the story is still just decent (not necessarily "good") and the ending twist takes away from the piece a bit. 6.5/10

The Land Before Time VIII: The Big Freeze

Unremarkable, but nice regardless, with passable songs (with the exception of 'Family', which is great), nice new characters, and a cute, rather warm plot. 5.75/10

The Land Before Time IX: Journey to Big Water

Right down there with II, this was a slog to sit through; headlined by the truly monstrous 'Imaginary Friend', filled with tensionless "action" scenes and an annoying new character, all that saves IX from being a 1/10 are its antagonist, one great song, and some good animation. 2.5/10

The Land Before Time X: The Great Longneck Migration

Though the sequel boasts a better-than-usual plot and likeable new characters, with a great final song; the movie has a stupid climax (feat. some of the least threatening sharpteeth in the franchise's history) and handles the events of the original movie terribly; this isn't enough to bring the movie down completely, but it does leave a pretty grevious mark on an otherwise alright movie. 5.25/10

The Land Before Time XI: Invasion of the Tinysauruses

Pretty boring with Littlefoot having an annoying voice; but I don't strongly hate anything about it, I just think it doesn't do much right. Though I do think it's bad, it's still tolerable enough. 4/10

The Land Before Time XII: The Great Day of the Flyers

Very cute, but not very good or substantial; the highlights for me were Guido as a character and Cera's subplot. Otherwise, I found it to be slow and dull, but bearably so. 5/10

The Land Before Time XIII: The Wisdom of Friends

A plot retread of the first movie, a truly horrid song, callous treatment of sharpteeth, and an entire species of insufferable nuisances, with the worst of them all being Doofah. "Yellow Belly Bounce" and "How Do You Know?" being tolerable is enough, but two "meh" songs aren't enough to make anything else from this movie salvageable. 1/10

Journey of the Brave is very mixed; though I loved Etta and her song and liked the story and some of the action, I also disliked a number of elements, such as the diggers, Chomper and Ruby's presence and some of Wild Arms' bits. Not a bad note to end the series on, but not a good one either. 5.5/10

Artwork can be found in Nano's Art Nest

Retrieved from "https://landbeforetime.fandom.com/wiki/User:NanoLancensis?oldid=208661"
Community content is available under CC-BY-SA unless otherwise noted.