Tyrannosaurus (pronounced /tɨˌrænəˈsɔːrəs/ or /taɪˌrænoʊˈsɔːrəs/, meaning 'tyrant lizard') is a genus of theropod dinosaur from North America. The famous species Tyrannosaurus rex ('rex' meaning 'king' in Latin), commonly abbreviated to T. rex (or incorrectly T-Rex), is a fixture in popular culture around the world, and is extensively used in scientific television and movies, such as documentaries and Jurassic Park, and in children's series such as The Land Before Time. Tyrannosaurus lived throughout what is now western North America, with a much wider range than other tyrannosaurids. Fossils of T. rex are found in a variety of rock formations dating to the last two million years of the Cretaceous Period, approximately 68 to 66 million years ago; it was among the last non-avian dinosaurs to exist prior to the Cretaceous–Tertiary extinction event.

Like other tyrannosaurids, Tyrannosaurus was a bipedal carnivore with a massive skull balanced by a long, heavy tail. Relative to the large and powerful hindlimbs, Tyrannosaurus forelimbs were small, though unusually powerful for their size, and bore two primary digits, along with a possible third vestigial digit. Although other theropods rivaled or exceeded T. rex in size]], it was the largest known tyrannosaurid and one of the largest known land predators, measuring up to 12.3 meters (40 ft) in length, up to 4 metres (13 ft.) tall at the hips, and up to 6.8 metric tonnes (7.5 short tons) in weight. By far the largest carnivore in its environment, T. rex may have been an apex predator, preying upon hadrosaurs and ceratopsians. Although some experts have suggested it was primarily a scavenger, this has been a highly controversial theory in recent years.

More than 30 specimens of T. rex have been identified, some of which are nearly complete skeletons. Soft tissue and proteins have been reported in at least one of these specimens. The abundance of fossil material has allowed significant research into many aspects of its biology, including life history and biomechanics. The feeding habits, physiology and potential speed of T. rex are a few subjects of debate. Its taxonomy is also controversial, with some scientists considering Tarbosaurus bataar from Asia to represent a second species of Tyrannosaurus and others maintaining Tarbosaurus as a separate genus. Several other genera of North American tyrannosaurids have also been synonymized with Tyrannosaurus.

Although Tyrannosaurus rex was larger than the well known Jurassic theropod Allosaurus, it was slightly smaller than Cretaceous carnivores Spinosaurus and Giganotosaurus.[9][10]

Tyrannosaurus is the type genus of the superfamily Tyrannosauroidea, the family Tyrannosauridae, and the subfamily Tyrannosaurinae; in other words it is the standard by which paleontologists decide whether to include other species in the same group. Other members of the tyrannosaurine subfamily include the North American Daspletosaurus and the Asian Tarbosaurus,[11][12] both of which have occasionally been synonymized with Tyrannosaurus.[13] Tyrannosaurids were once commonly thought to be descendants of earlier large theropods such as megalosaurs and carnosaurs, although more recently they were reclassified with the generally smaller coelurosaurs.[14]

The identification of several specimens as juvenile Tyrannosaurus rex has allowed scientists to document ontogenetic changes in the species, estimate the lifespan, and determine how quickly the animals would have grown. The smallest known individual (LACM 28471, the "Jordan theropod") is estimated to have weighed only 29.9 kg (66 lb), while the largest, such as FMNH PR2081 ("Sue") most likely weighed over 5400 kg (6 short tons). Histologic analysis of T. rex bones showed LACM 28471 had aged only 2 years when it died, while "Sue" was 28 years old, an age which may have been close to the maximum for the species.[8]

Like many bipedal dinosaurs, Tyrannosaurus rex was historically depicted as a 'living tripod', with the body at 45 degrees or less from the vertical and the tail dragging along the ground, similar to a kangaroo. This concept dates from Joseph Leidy's 1865 reconstruction of Hadrosaurus, the first to depict a dinosaur in a bipedal posture.[15] Henry Fairfield Osborn, former president of the American Museum of Natural History (AMNH) in New York City, who believed the creature stood upright, further reinforced the notion after unveiling the first complete T. rex skeleton in 1915. It stood in this upright pose for nearly a century, until it was dismantled in 1992.[16] By 1970, scientists realized this pose was incorrect and could not have been maintained by a living animal, as it would have resulted in the dislocation or weakening of several joints, including the hips and the articulation between the head and the spinal column.[17]

Sue Hendrickson, amateur paleontologist, discovered the most complete (more than 90%) and, until 2001, the largest, Tyrannosaurus fossil skeleton known in the Hell Creek Formation near Faith, South Dakota, on 12 August 1990. This Tyrannosaurus, nicknamed "Sue" in her honor, was the object of a legal battle over its ownership. In 1997 this was settled in favor of Maurice Williams, the original land owner, and the fossil collection was sold at auction for USD 7.6 million, making it the most expensive dinosaur skeleton to date. It has now been reassembled and is currently exhibited at the Field Museum of Natural History. A study of this specimen's fossilized bones showed that "Sue" reached full size at age 19 and died at age 28, the longest any tyrannosaur is known to have lived.[20] The "Sue" specimen apparently died from a massive bite to the head, which could only have been inflicted by another tyrannosaur.[21]

Tyrannosaurus in The Land Before Time

In both the Land Before Time films and television series, Tyrannosaurus plays an important role in sequences involving predators, similarly to the T. rex in Jurassic Park. As is the case for all carnivorous dinosaurs in the series, though some others have more specific terms, the herbivorous characters simply refer to Tyrannosaurus as "Sharpteeth". Contrary to modern paleontological thought, the series' T. rex is usually portrayed with an upright posture, but have also been seen in the correct horizontal posture (either standing, walking, or running).

In the first six installments in The Land Before Time, adult Tyrannosaurus are depicted with dark green, brown, or olive scales, with their eyes being entirely composed of black and red. Later installments, however, depict them with more humanistic eyes, with white sclera and brightly colored irises, as well as scales that come in a variety of colors, including (but not limited to) olive, orange, and gray.

In the original 1988 theatrical feature, The Land Before Time, the main antagonist was a Tyrannosaurus. This character, referred to by the other characters as "Sharptooth", as though it were his given name, started off the use of the term for predatory animals - particularly non-therizinosauroid and oviraptorid theropods - in The Land Before Time films and TV series. Other Tyrannosaurus seen throughout the franchise run include:

Screenshots of Tyrannosaurus characters in The Land Before Time series.

The original Sharptooth, from The Land Before Time.

Chomper, in The Land Before Time V: The Mysterious Island.

Chomper and his mother, discussing Littlefoot in the background.

Chomper's father, watching him gathering fruits and vegetables for the main characters.

An example of a latter-day Tyrannosaurus, from The Great Longneck Migration 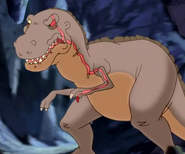 Red Claw, the main antagonist of the television series
Add a photo to this gallery

Since it was first described in 1905, Tyrannosaurus rex has become the most widely recognized dinosaur in popular culture. It is the only dinosaur which is routinely referred to by its full scientific name (Tyrannosaurus rex) among the general public, and the scientific abbreviation T. rex has also come into wide usage (commonly misspelled "T-Rex").[22] Robert T. Bakker notes this in The Dinosaur Heresies and explains that a name like "Tyrannosaurus rex is just irresistible to the tongue."[4]

Tyrannosaurus rex is unique among dinosaurs in its place in modern culture; paleontologist Robert Bakker has called it "the most popular dinosaur among people of all ages, all cultures, and all nationalities".[23] From the beginning, it was embraced by the public. Henry Fairfield Osborn billed it the greatest hunter to have ever walked the earth. He stated in 1905,[24]

In 1942, Charles R. Knight painted a mural incorporating Tyrannosaurus facing a Triceratops in the Field Museum of Natural History for the National Geographic Society, establishing the two dinosaurs as enemies in popular thought;[25] paleontologist Phil Currie cites this mural as one of his inspirations to study dinosaurs.[24] Bakker said of the imagined rivalry between Tyrannosaurus and Triceratops, "No matchup between predator and prey has ever been more dramatic. It’s somehow fitting that those two massive antagonists lived out their co-evolutionary belligerence through the very last days of the very last epoch of the Age of Dinosaurs."[25]

Retrieved from "https://landbeforetime.fandom.com/wiki/Tyrannosaurus?oldid=208081"
Community content is available under CC-BY-SA unless otherwise noted.