Land Before Time Wiki
Register
Don't have an account?
Sign In
Advertisement
in: Longnecks, One-Movie only characters, Land Before Time X: The Great Longneck Migration introductions,
and 8 more

Sue is a gigantic Longneck (Supersaurus) who goes with Littlefoot and his grandparents in The Land Before Time X: The Great Longneck Migration.

Sue, being a Supersaurus, is larger than most other longnecks in the series, dwarfing recurring characters in the series such as Littlefoot's grandparents and Bron.

Most of her body is pink, with a stripe of darker pink running from the top of her head to the tip of her tail and lighter pink coating her underside. Her eyes are light blue.

She first appears after stepping on a large Belly Dragger who had tried to eat Littlefoot after he jumped off a log, almost landing in it's mouth. At first, he and his grandparents are scared of her huge size. She then lowers her neck and they calm down. She is then thanked by his grandparents for saving him, and asks if she could tag along, to which they accept. That night, she talks to Littlefoot about how she was having strange sleep stories like him too, and talking about her being the tallest one, and that she wants to have someone to look up to. Littlefoot falls asleep while she talks.

When the Longnecks stop walking in a forest days later, not knowing where they are, Grandpa Longneck asks Sue if she could get Littlefoot on the trees to see where they are. Sue carries Littlefoot up to a tree branch to look out to the discovered crater - which is is revealed to be the longnecks' destination.

At the crater later in the film, she looks around for a longneck bigger than her. At first, every longneck is smaller than her, and as she walks through a herd of longnecks without looking, she bumps into a large Ultrasauros that is even taller than her. She quickly falls in love with him.

During the eclipse near the end of the movie, Sue tells Littlefoot and Shorty to get on her head and to not look at the sun as it would hurt their eyes. After the eclipse ends, Sue says that it was incredible. At the end of the film, she is asked by Grandma and Grandpa Longneck if she wants to walk back with them, but she declines, as she wants to walk back with her new Ultrasauros boyfriend.

"I hate those things, don't you? So annoying when they nibble on your foot" (First words spoken in the series)

"I'm Sue and you don't have to thank me. It was fun" (Introducing herself to Littlefoot and his Grandparents)

"I don't mean to be pushy or anything, but can I tag along with you? I think we're heading the same way" (Asking to join Littlefoot and his Grandparents on the journey to the crater)

"Little Lady?" (Laughing at the Ultrasauros after he calls her a "little lady").

Sue stomps on a Belly Dragger 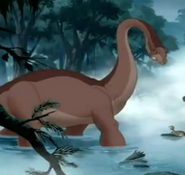 "What's the point of having big feet if don't have any to step on bad guys every now and then?"

Littlefoot and his grandparents allowing Sue to come along with them

Sue is the third longneck in the back

Sue walking past Littlefoot as he starts to feel sleepy.

Sue carrying Littlefoot with her tail

Sue taking Littlefoot to her face with her tail

Sue speaks to Littlefoot, who is on her head

Sue tells Littlefoot that she wants someone to look up to as he falls asleep.

Sue in the crater

Sue bumps into an even taller Longneck.

Sue quickly falls in love with the Longneck

Bron: "Your friend, Sue can handle that many herself".

Sue telling Littlefoot and Shorty "Come on you guys, hop on".

Sue with other longnecks trying to catch the sun

Sue with Littlefoot and Shorty on her head

Sue, after the eclipse

Sue and her new boyfriend

Sue tells Grandma and Grandpa Longneck that she is going to walk back with her boyfriend.