Sharptooth or Sharpteeth (Plural) is a term used by the characters in the Land Before Time films and TV series. It refers to carnivorous creatures, primarily carnivorous theropods; most prominently Tyrannosaurus. Many different theropod species have appeared throughout the franchise; many ranging in various shapes and sizes. Since The Land Before Time IV, deriative of Sharptooth has expanded to multiple species than just theropods, but the most common is the Tyrannosaurus. Most antagonists in the franchise are Sharpteeth, and at least one has appeared in every film.

Smaller theropods, such as Velociraptor and Deinonychus, are called Fast Biters due to their agility, speed, and small size. Large theropods such as Tyrannosaurus and Allosaurus do not usually have terms specific to certain breeds, being simply referred to as "Sharpteeth" by the characters. Some fans, however, have created conjectural terms for specific sharptooth breeds, derived from physical traits or the locations in which they appear.

Sharpteeth throughout the series

In the first entry of the Land Before Time series, there was one particular Sharptooth, a male Tyrannosaurus rex, who served as the main antagonist of the film. He is most notable for killing Littlefoot's mother, having only one good eye, and surviving multiple deadly situations. He is known as the most persistent, agile, and dangerous sharptooth in the entire franchise. Only a handful of sharpteeth have come somewhat close to his level of strength and ferocity.

The Sharptooth in The Land Before Time (original) 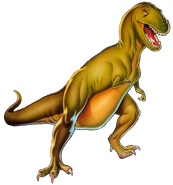 Chomper is, at least so far, most notable for being the only known Sharptooth in the Land Before Time universe to be friendly to herbivores.

A pair of adult Tyrannosaurus; next to Sharptooth himself and the infant Sharptooth Chomper, Chomper's parents are the most prominent Sharpteeth in the series. They appear in the films in which their son is featured (except Journey of the Brave). Chomper's parents are never given names. For reasons unknown, they never appeared to show any affection towards each other, aside from the fifth Movie, where it seems that Chomper's Father was checking up on his mate after throwing the Plated Sharptooth off the cliff for wounding her. However, they have generally only been shown in times of conflict with Leaf Eaters or other Sharpteeth, and much of their private life is unknown. Chomper's Father in the second film bears a striking resemblance to the original Sharptooth from the first film, though he is a lighter shade of green and is not as large. Mama and Papa do not pose a threat to the gang anymore, since Littlefoot saved Chomper from Plates when they fell into the Big Water.

The Tyrannosaurus from the climax,

These are the latest recurring Sharpteeth and are the first Sharpteeth since Chomper to have been assigned names. They have appeared only in the TV series. Red Claw, a Tyrannosaurus, is said to be the meanest Sharptooth of all. He is identified by the long red scar extending from his left eye down to the side of his body and arm to his claw. Screech and Thud are Fast Biters (Deinonychus), and are Red Claw's lackeys. They did not appear in The Land Before Time XIV: Journey of the Brave, so it is unknown if they will appear in a future film.

Many Sharpteeth appear throughout the series, though they are portrayed more as random wandering predators than proper characters, none of them possessing the single minded ferocity and seeming invincibility of the original (with the exception of Plates, and perhaps the Browridge Sharptooth).

Although they are often perceived as mindless killers, being called "cowards" and "not very bright" by Bron and Grandpa Longneck respectively, The Land Before Time II: The Great Valley Adventure revealed that Sharpteeth are indeed sentient like the rest of the dinosaurs and that they even form loving families. Chomper, however, does acknowledge the difficulty of friendship between herbivores and carnivores due to their differences, especially in diet. Furthermore, in The Land Before Time V: The Mysterious Island, Sharpteeth are shown to be just as intelligent and sensitive as other dinosaurs but simply speak a different language consisting of roars and growls.

Sharptooth duo during the song "The Legend of the Lone Dinosaur", VI

Sharptooth, VI (Tyrannosaurus), believed by a few to be some sort of incarnation of the Meanest Sharptooth

Chomper is the only bilingual Sharptooth in the films and TV show (unless Ichy and Dil are but this isn't stated for certain, though likely they are too) as he is able to speak his own native language, and that of the herbivorous dinosaurs.

The term for the language was identified as "Sharptooth" by Littlefoot in "The Cave of Many Voices". The language of Sharpteeth appears to be made up of roars, growls and snarls. These are deep, loud, sometimes high-pitched and thunderous. While the language of the herbivores, as they are the protagonistic creatures in the series, is heard as English to the audience, the Sharptooth language has never been directly translated, although sometimes a caption translating their dialect is shown at the bottom of the screen. The only instances to date in which this has been done are The Land Before Time V: The Mysterious Island, in which throughout the film, the conversations between Chomper and his parents are captioned, and in the television episode "Escape From the Mysterious Beyond", in which the conversation between Chomper and Thud, the Fast Biter, is captioned.

Though its usage has extended as far back as the original film, the Sharptooth language was first used as a proper conversational tool in The Land Before Time II: The Great Valley Adventure by Chomper and his parents when they talked, though no captions were used.

The next time the language is used in a notable light is when Chomper and his parents are talking in The Land Before Time V: The Mysterious Island, which marks the first time that captions are used for the Sharptooth language.  Cera expresses doubt that Sharpteeth can talk, but Littlefoot correctly believed they do have their own language.

The language is also occasionally ackowledged as proper language throughout the television series. Chomper talks in Sharptooth in 'The Cave of Many Voices', though captions are not used in the episode, nor in 'The Lonely Journey'. However, captions are presented for the dialogue between Chomper and Thud in 'Escape From The Mysterious Beyond'.

It is unknown if Swimming Sharpteeth use this language or if they use the marine language like Mo does or if they use some other language altogether. Dil and Ichy know Leaf Eater, though the reason is not specified, and they never converse in or use Sharptooth.

Ruby may also know Sharptooth, as indicated by her saying she had promised Chomper's parents to look after him, something that would seem hard to do if she didn't know it (barring the possibility that Chomper was translating for them).

After the first movie, the term "Sharptooth" was extended to theropods in general. Tyrannosaurs, dromaeosaurs ("Fast Biters" in the television series), spinosaurs, carnosaurs, and coelurosaurs have been referred to as "Sharpteeth", later the franchise the term was extended to different predatory animals than just simply theropods. One in particuliar is a "Flying Sharptooth" which is coined for primarily Pterosaurs that have sharp teeth and eat meat, and the term "Swimming Sharptooth" was coined for the shark depicted in the fifth movie and later extended to include Liopleurodon and other sea creatures that ate meat.

Sharpteeth are generally all carnivorous theropods, with a minority being sea creatures and pterosaurs, etc. Upon the appearance of the first group of Sharpteeth, the bipedal sharpteeth, such as Tyrannosaurus have a box-shaped face and are typically large in size, though this isn't the same for all sharpteeth exactly (ex. the Allosaurus in The Land Before Time VI: The Secret of Saurus Rock in comparison to the ones in reality have a triangular-shaped head with rugged features). Fast Biters however are smaller and have been drawn with a rugged-edge snout (similar to Ozzy and Strut's appearance). The majority of Sharpteeth have dark bags around their eyes, to point their bitterness (with the exception of most sharpteeth in TV series and the Allosaurus).

This is a good article. With a few more touchups, you might consider nominating it to be promoted to Featured Status.
Community content is available under CC-BY-SA unless otherwise noted.
Advertisement