Start a Wiki
Scolosaurus is an extinct genus of ankylosaurid dinosaurs within the subfamily Ankylosaurinae. It is known from either the lower levels of the Dinosaur Park Formation or upper levels of the Oldman Formation (the location of the type specimen's quarry is uncertain) in the Late Cretaceous (latest middle Campanian stage, about 76.5 Ma ago) of Alberta, Canada. It contains a single species, Scolosaurus cutleri. It is the oldest known North American anklylosaurid.

For a long time, it was considered synonymous with Euoplocephalus after the later's discovery, but following research eventually found both dinosaurs to be separate genera.

Rooter, a character from The Land Before Time, appears to be based on some depictions of Scolosaurus from the time the film came out, though whether or not he is certainly intended to actually be a Scolosaurus is unknown. 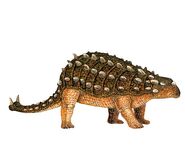 Traditional restoration of Scolosaurus; Rooter may have been based off of similar depictions of the animal
Add a photo to this gallery
Retrieved from "https://landbeforetime.fandom.com/wiki/Scolosaurus?oldid=211436"
Community content is available under CC-BY-SA unless otherwise noted.