Pink with magenta crest and markings and light underbelly

Ruby (also known as Responsible Ruby[2]), voiced by Meghan Strange, is a main character in The Land Before Time TV series, when she took on the responsibility as Chomper's caregiver after being separated from their families. She is an Oviraptor, which is called a "Fast Runner" in the series. The first movie she has appeared in is The Land Before Time XIV: Journey of the Brave. She has been listed in seventh place of the main characters after Littlefoot, Cera, Ducky, Petrie, Spike, and Chomper.

Ruby is often the voice of wisdom among the young dinosaurs, able to explain matters the others do not understand. She has a calm demeanor and shows kindness and empathy to others. A strange habit of hers is to sometimes immediately repeat herself in a "backwards" and slightly redundant way. For instance, she might say as a greeting: "Hello, my friends; my friends, hello!" She may be considered the "opposite" of Chomper, being female, calm, and more relaxed than him (she preferred to relax in warm mud over playing a sport with him in one episode). She is also older and smarter due to more experience in life.

Ruby is usually kind and gentle, though, in ""Return to Hanging Rock"," she is shown to be impulsive in that she tried to go to Hanging Rock alone despite being advised not to. Furthermore, she has a great deal of stamina, as can be seen in "Return to Hanging Rock" where she was continuing up a steep hill while Chomper, Ducky, and Spike are all worn out and that she continues to try and reach Hanging Rock, despite it being near dark and after much traveling, and grows impatient with the desires of the others to rest.

She also appears to be helpful, as she helped get Treestars for the Flyers searching for Petrie and Guido.

As seen in flashbacks in the series, Ruby lived with her family in the Mysterious Beyond until Red Claw and his Fast Biters, Screech and Thud, posed a threat to them. Chomper suggested that the two of them travel to the Great Valley, and meet up with his friends Littlefoot, Cera, Ducky, Petrie and Spike. Chomper's parents had apparently given Ruby the responsibility to look after and protect Chomper, as stated in "The Cave of Many Voices".

In a flashback in "The Star Day Celebration", just before Ruby and Chomper make their way to the Great Valley, Ruby is saying goodbye to her family, and her father reminds her to study how the residents of the Great Valley cooperate with each other. Her mother then adds "Someday it may save us from...", at which point she is interrupted by Chomper's warning that Red Claw and the Fast Biters are close at hand, and he and Ruby set off. This scene implies that Ruby is on a mission to learn how the inhabitants of the Great Valley work together as one herd, though they are of diverse species, so she can communicate this information to the residents of the Mysterious Beyond. They can then, in turn, use this knowledge to defeat or drive off Red Claw and his Fast Biters.

Ruby has a mother, a father, and two younger siblings. They have appeared in "The Star Day Celebration" and ""Return to Hanging Rock"." Her parents have wrinkles, implying age. Her mother is pink and her father is blue. Her father also has an elderly-like voice. Her siblings are pink and blue, one individually.

Ruby's age is not known in the TV series but she is likely the same age as Littlefoot, Cera, Ducky, and Petrie.

Ruby was originally going to be named "Ovie", a pun on her species name, Oviraptor.[3]

On many pieces of The Land Before Time merchandise and media, Ruby is shown to have her lighter belly-color on the top part of her beak instead of it being her base color. This could indicate that she was originally intended to have lighter color there.

Ruby as a baby

Ruby along with her family

Chomper and Ruby as seen in the trailer for The Land Before Time XIV: Journey of the Brave 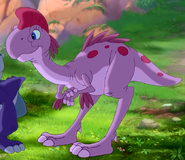 Ruby, in Journey of the Brave 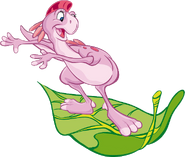 Ruby has not spawned as much merchandise as the other main characters in the franchise. The character is featured, however, in "The Land Before Time Earthshakin' Playset", issued by Playmates,[4] and also has a beanie plush toy.

The Land Before Time: Earthshaking Mountain!

Ruby Plush (seen in bottom with all land before time toys and merchandise.) in Toy Fair 2008. 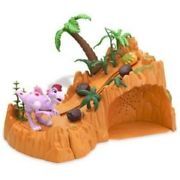 Though her feathers are normally only one color, during one flashback to her when she was younger, she had two feather colors in Return to Hanging Rock.

Ruby: Being here is even better, now that we are here!

Ruby: I'm right here. Of course, I'm always here, since here is wherever I am.

Ruby:  I'm glad it's you and not the you I thought was you.

Ruby: I may not be with my family, but I sure do feel at home!

Chomper: This game is fun, especially when I win!

Ruby: Don't count your hatchlings before they hatch, Chomper!

Ruby: I can't smell anything. But your smeller does smell more smells then mine.

Ruby: How exciting!  Now I know why everyone's so excited!

Ruby:  Whatever is going to happen won't happen until it does.

Ruby: I don't want this Star Day to be my last day!

Chomper: Are you OK, Ruby?

Ruby: Yes, but I think that big rock will keep me in here with it instead of out there with you!

Ruby: Chomper wait! How am I supposed to watch you if I can't see you!?

Littlefoot: Seems like everywhere we go, more and more people want to hear about the amazing threehorn girl.

Ruby: I don't think she minds. After all, talking about Cera is one of Cera's favorite things to talk about!

Ruby: (On hard water sweets) That sounds like something I've never heard of before!

Mr. Thicknose:  Are you kids all right?

Ruby: Except for being cold, wet, hungry. and miserable, I think we're all fine thank you.

Ruby:  The longer you're mad, the less you're happy.

Ruby: I think I need to go do some thinking at my thinking place.