Parasaurolophus (pronounced /ˌpærəsɔˈrɒləfəs/ PARR-ə-saw-ROL-ə-fəs, commonly also /ˌpærəˌsɔrəˈloʊfəs/ PARR-ə-SAWR-ə-LOH-fəs; meaning "near crested lizard" in reference to Saurolophus) is a genus of ornithopod dinosaur from the Late Cretaceous Period of what is now North America, about 76-73 million years ago. It was a herbivore that walked both as a biped and a quadruped. Three species are recognized: P. walkeri (the type species), P. tubicen, and the short-crested P. cyrtocristatus. Remains are known from Alberta, Canada, and New Mexico and Utah, USA. It was first described in 1922 by William Parks from a skull and partial skeleton in Alberta.

Parasaurolophus is a hadrosaurid, part of a diverse family of Cretaceous dinosaurs known for their range of bizarre head adornments. This genus is known for its large, elaborate cranial crest, which at its largest forms a long curved tube projecting upwards and back from the skull. Charonosaurus from China, which may have been its closest relative, had a similar skull and potentially a similar crest. The crest has been much discussed by scientists; the consensus is that major functions included visual recognition of both species and sex, acoustic resonance, and thermoregulation. It is one of the rarer duckbills, being known from only a handful of good specimens.

As is the case with most dinosaurs, the skeleton of Parasaurolophus is incompletely known. The length of the type specimen of P. walkeri is estimated at 9.5 meters (31 ft). Its skull is about 1.6 meters (5.2 ft) long, including the crest, whereas the type skull of P. tubicen is over 2.0 meters (6.6 ft) long, indicating a larger animal.[1] Its weight is estimated at 2.5 tonnes (2.7 tons).[2] Its single known forelimb was relatively short for a hadrosaurid, with a short but wide shoulder blade. The thighbone measures 103 centimeters (3.38 ft) long in P. walkeri and is robust for its length when compared to other hadrosaurids.[3] The upper arm and pelvic bones were also heavily built.[4]

Like other hadrosaurids, it was able to walk on either two legs or four. It probably preferred to forage for food on four legs, but ran on two.[5] The neural spines of the vertebrae were tall, as was common in lambeosaurines;[3] tallest over the hips, they increased the height of the back. Skin impressions are known for P. walkeri, showing uniform tubercle-like scales but no larger structures.[6]

The most noticeable feature was the cranial crest, which protruded from the rear of the head and was made up of the premaxilla and nasal bones. The P. walkeri type specimen has a notch in the neural spines near where the crest would hit the back, but this may be a pathology peculiar to this individual.[3] William Parks, who named the genus, hypothesized that a ligament ran from the crest to the notch to support the head.[6] Although the idea seems unlikely,[2] Parasaurolophus is sometimes restored with a skin flap from the crest to the neck.

The crest was hollow, with distinct tubes leading from each nostril to the end of the crest before reversing direction and heading back down the crest and into the skull. The tubes were simplest in P. walkeri, and more complex in P. tubicen, where some tubes were blind and others met and separated.[7] While P. walkeri and P. tubicen had long crests with only slight curvature, P. cyrtocristatus had a short crest with a more circular profile.[8]

As its name implies, Parasaurolophus was initially thought to be closely related to Saurolophus because of its superficially similar crest.[6] However, it was soon reassessed as a member of the lambeosaurine subfamily of hadrosaurids—Saurolophus is an hadrosaurine.[9] It is usually interpreted as a separate offshoot of the lambeosaurines, distinct from the helmet-crested Corythosaurus, Hypacrosaurus, and Lambeosaurus.[5][10][11] Its closest known relative appears to be Charonosaurus, a lambeosaurine with a similar skull (but no complete crest yet) from the Amur region of northeastern China,[12] and the two may form a clade Parasaurolophini.[11] P. cyrtocristatus, with its short, rounder crest, may be the most basal of the three known Parasaurolophus species,[11] or it may represent subadult or female specimens of P. tubicen.[13]

Many hypotheses have been advanced as to what functions the cranial crest of Parasaurolophus performed, but most have been discredited.[2][14] It is now believed that it may have had several functions: visual display for identifying species and sex, sound amplification for communication, and thermoregulation. It is not clear which was most significant at what times in the evolution of the crest and its internal nasal passages.[15]

Differences between species and growth stages

As for other lambeosaurines, it is believed that the cranial crest of Parasaurolophus changed with age and was a sexually dimorphic characteristic in adults. James Hopson, one of the first researchers to describe lambeosaurine crests in terms of such distinctions, suggested that P. cyrtocristatus, with its small crest, was the female form of P. tubicen.[16] Thomas Williamson suggested it was the juvenile form.[13] Neither hypothesis became widely accepted. As only six good skulls and one juvenile braincase are known, additional material will help clear up these potential relationships. Williamson noted that in any case, juvenile Parasaurolophus probably had small, rounded crests like P. cyrtocristatus, that probably grew faster as individuals approached maturity.[13] Recent restudy of a juvenile braincase previously assigned to Lambeosaurus, and now assigned to Parasaurolophus, provides evidence that a small tubular crest was present in juveniles. This specimen preserves a small upward flaring of the frontal bones that was similar to but smaller than what is seen in adult specimens; in adults, the frontals formed a platform that supported the base of the crest. This specimen also indicates that the growth of the crest in Parasaurolophus and the facial profile of juvenile individuals differed from the Corythosaurus-Hypacrosaurus-Lambeosaurus model, in part because the crest of Parasaurolophus lacks the thin bony 'coxcomb' that makes up the upper portion of the crest of the other three lambeosaurines.[17]

Parasaurolophus in The Land Before Time

The main character Ducky, her parents, and her biological siblings have been identified as Parasaurolophus on the official Land Before Time website,[18] and on many pieces of merchandise. However, they are identified as Saurolophus on the Land Before Time Sing-Along Songs video. There is also much persistence from the fans of the series that the characters are more congruent in appearance to Saurolophus,[19][20] due to the shortness and upwards angle of their crests. These inconsistencies have cause much dispute among fans.

Reviewers of the series frequently mistake them to be Anatosaurus (which is officially Edmontosaurus).[21][22][23][24][25] However, they have apparently failed to note that, while Edmontosaurus (Anatosaurus) did have a head crest, it was in the center of its head and not large and curved back like that of Parasaurolophus.

Main character Ducky, in The Land Before Time; Parasaurolophus is one of the species she and her biological family officially been assigned to by Universal over the years, alongside Saurolophus and Anatosaurus.

Parasaurolophus during The Great Earthshake in The Land Before Time, fleeing alongside two members of Ducky's species

A Parasaurolophus skeleton in the first movie

A mother Parasaurolophus with her young, in The Land Before Time VII: The Stone of Cold Fire.

Parasaurolophus in a crowd of dinosaurs. 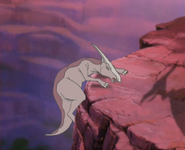 The Land Before Time VII: The Stone of Cold Fire

Another Parasaurolophus makes a cameo in The Land Before Time XIV: Journey of the Brave

Headshots of a Parasaurolophus (middle) and a Lambeosaurus, in "The Amazing Threehorn Girl".