Land Before Time Wiki
Register
Don't have an account?
Sign In
Advertisement
in: Sharptooth, B-Class Articles, Fathers,
and 14 more

Meat, other dinosaurs (barring his family and his son's friends)

Papa Sharptooth is dark green in color and very similar in appearance to the Sharptooth from the first film, aside from having two functional eyes, and being a different shade.

Not much is known about him, though he has been shown to be very protective of his son Chomper, breaking into the Great Valley to search for him after his egg was stolen by Littlefoot and his friends.

Some comedy is gleaned from Papa Sharptooth's concern over his son's bizarre behavior. On seeing Chomper gathering plants for Littlefoot and the others, he assumes that Chomper is collecting plants for himself and says, by subtitles, "Sometimes I worry about that boy." He has another moment when he meets Littlefoot, who after hiding in the stinky flowers, smells like them. He sniffs them and says to his wife, "Anything that smells like that couldn't taste very good anyway."

Initially antagonistic towards the main characters, he now shares his wife's promise not to eat them, since Littlefoot risked his own life to save Chomper.

In The Land Before Time II: The Great Valley Adventure, he first appears with his mate, moving into the Great Valley after the Great Wall was destroyed, to look for their egg which contained Chomper. The pair find the gang after they had just escaped Ozzy and Strut. The pair chases them, but the gang escape, after Mama Sharptooth nearly ate Littlefoot and Cera.

Later, Papa Sharptooth finds the gang after they managed to knock out his mate. He appears in front of Cera and Spike. He nearly ate Spike, who was frozen with fear, before Ducky jumps onto him and starts pulling on his nostrils and jumping on his head. Soon, his mate recovers and accidentally bites him on the snout, trying to eat Ducky. They both get into a fight before turning to eat Ducky and Petrie who are on the ground. Just then, the adult herbivorous dinosaurs intervene. Chomper's Mother then tussles with Littlefoot's grandparents while he battles Cera's father. They are driven out of the area by the herd.

Later, as they are disappointed that they could not find their son's egg, they come across Littlefoot and their son Chomper. Littlefoot gets his leg stuck and the pair prepare to kill him and Chomper. But they soon realize that Chomper is their son. They leave with their son. But later, Ozzy and Strut capture Littlefoot and take him to the Great Wall. Chomper went to save Littlefoot but was captured as well. Papa and his mate were enraged to see that Ozzy and Strut captured his son, and that they were about kill him and Littlefoot. They then chase the egg stealers out of the valley, and Chomper follows.

In the fifth film, Chomper attempts to hide the gang from his parents after they are marooned on the Mysterious Island, as he was scared that his parents might eat them. He appears a little over halfway into the film along with his mate, speaking to Chomper. He tells him that he had them worried sick and that he should come to dinner. He says he will be there in a minute. Both of them were unaware that another sharptooth was living on the island with them.

He and his mate thank the gang for saving Chomper and promise not to eat them. While the four other children moved away from him a bit when he smelled them, nervous about being so close to a Sharptooth, Spike didn't seem to mind at all, hugging his foot.

Some time later, Papa Sharptooth and Mama Sharptooth sent Chomper, under Ruby's protection, to the Great Valley when Red Claw returned, knowing that Littlefoot and his friends would look after him. 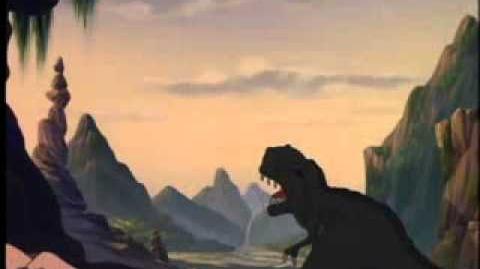 This article is a B-class article. You can help Land Before Time Wiki by giving it more of the necessary criteria.
Community content is available under CC-BY-SA unless otherwise noted.