Pachycephalosaurus is an extinct genus of ornithschian dinosaurs. It was a bipedal herbivore with an extremely thick skull roof, long legs and short arms. It lived during the Late Cretaceous lived with other North American dinosaurs such as Triceratops and Tyrannosaurus. The fossil can be found in both the United States and Canada.

The thick skull domes of Pachycephalosaurus and related genera gave rise to the theory that pachycephalosaurs used their skulls to fight each other. This theory has been disputed in the past few years.

The anatomy of Pachycephalosaurus is not well known, as only its skull has been described. [1] Pachycephalosaurus is famed for its large dome on top of its skull, made of up to 10 in thick bone, which kept its tiny brain safe. The dome's rear aspect was edged with bony knobs and short bony spikes sticking up from the snout. The spikes were likely blunt, not sharp.

The skull was short, with large, rounded eyes that faced towards the front, suggesting that the animal had good sight and was capable of binocular vision. Pachycephalosaurus had a small snout which ended in a sharp beak. The teeth were tiny, with leaf-shaped crowns. The head was supported by an "S"- or "U"-shaped neck. [2]

Pachycephalosaurus was likely bipedal and was the largest in the group family. It measured 15 to 16 feet long, stood 6 feet tall which is the same height as Deinonychus, and weighed 990 pounds.[3] Based on other dome-headed dinosaurs, it probably had a short, thick neck, short fore limbs, a strong body, long hind legs and a thick tail, which was likely held stiff by ossified tendons. [4]

Remains attributed to Pachycephalosaurus may have been found since the 1850s. As judged by Donald Baird, in 1859 or 1860 Ferdinand Vandiveer Hayden, an early fossil collector in the North American West, picked up a piece of bone close to the head of the Missouri River, from what is now known to be the Lance Formation in Montana. [5] This specimen was described by Joseph Leidy in 1872 as from the dermal plate of a reptile or an armadillo-like animal. [6] Its true nature was not found until Baird restudied it a century later and identified it as a bone from the back of the skull of Pachycephalosaurus, including a set of bony knobs that matched those found on other specimens of Pachycephalosaurus. [7] Since the name Tylosteus predates Pachycephalosaurus, according to the International Code of Zoological Nomenclature it should be used. In 1985, Baird successfully petitioned to have Pachycephalosaurus used in lieu of the old Tylosteus as the latter name had not been used for more than 50 years, was based on undiagnostic materials, and had poor information. [8] [9] This may not be the end; Robert Sullivan suggested in 2006 that the fossil is more like the bone of Dracorex than that of Pachycephalosaurus.[10] The could be of little importance, though, if Dracorex is deemed a youn Pachycephalosaurus, as has been recently proposed. [11]

P. wyomingensis, the type and sole valid species of Pachycephalosaurus so far, was named by Charles W. Gilmore in 1931. He coined it for a skull from the Lance Formation of Niobrara County, Wyoming. Gilmore assigned his new species to Troodon as T. wyomingensis. [12]At the time, paleontologists thought that Troodon, then known just from teeth, was the same as Stegoceras, which had similar teeth. Therefore, what are now known as pachycephalosaurids were assigned to the family Troodontidae, a wrong idea not corrected until 1945, by Charles M. Sternberg. [13]

The pachycephalosaur Dracorex may actually be a Stygimoloch or Pachycephalosaurus in which the dome and horns are not well-developed, either because the animal was a juvenile or a female. This idea was backed up at the 2007 annual meeting of the Society of Vertebrate Paleontology.[14] Jack Horner of Montana State University showed proof, from study of the skull of the one existing Dracorex specimen, that this dinosaur may well be a young form of Stygimoloch. Plus, he showed data that shows both Stygimoloch and Dracorex may be young forms of Pachycephalosaurus. Horner and M.B. Goodwin published their findings in 2009, that showed the spike/node and skull dome bones of all three 'species' have extreme plasticity, and that both Dracorex and Stygimoloch are just known from young specimens while Pachycephalosaurus is just known from adult specimens. These notes, as well as the fact that all three forms lived in the same time and place, lead them to think that Dracorex and Stygimoloch were just young Pachycephalosaurus, which lost spikes and grew domes as they aged.[15] A 2010 study by Nick Longrich and colleagues also backed up the theory that all flat-skulled pachycephalosaurs were young, suggesting that flat-skulled forms like Goyocephale and Homalocephale represent juveniles of dome-skulled adults.[16]

Nearly all Pachycephalosaurus fossils came from the Lance Formation and Hell Creek Formation.[17] Pachycephalosaurus co-existed with young pachycephalosaurs Dracorex and Stygimoloch.[18] Other dinosaurs like Thescelosaurus, Edmontosaurus, Triceratops, Ankylosaurus, and the theropods Ornithomimus, and Tyrannosaurus shared its time and place.[19]

Scientists once thought that Pachycephalosaurus and its relatives were like bighorn sheep or musk oxen; where males would ram each other with head butts. It was also believed that they would make their head, neck, and body horizontally straight, to transmit stress during the crash. But it is now believed that the pachycephalosaurs could not have used their domes in this way.

First, the skull roof could not have adequately sustained impact associated with such shock. Also, there is no evidence of scars or other harm on fossils of Pachycephalosaurus skulls.[20] Furthermore, the dorsal vertebrae show that the neck was carried in an "S"- or "U"-shaped curve, not a straight direction, and thus to weak for direct clash of heads. Lastly, the rounded shape of the skull would lessen the contacted surface area during head-butting, resulting in misses.

Scientists do not yet know what these dinosaurs ate. Having small, ridged teeth they could not have chewed tough, fibrous plants as effectively as other dinosaurs of the same time. It is assumed that pachycephalosaurs lived on a mixed diet of leaves, seeds, fruit and insects. The sharp, jagged teeth would have been very effective for shredding plants.[22]

Pachycephalosaurus in The Land Before Time

Pachycephalosaurus are commonplace as background characters in The Land Before Time, and have been referred to by a number terms during the series, including "crownhead", "lizardhead", and "bonehead".

More Pachycephalosaurus appear in The Land Before Time IV: Journey through the Mists in The Land of Mists, wherein one pachycephalosaur frightens a flock of Struthiomimus into a river and threatens the main characters, before noticing another member of its kind challenging it to a fight. The two Pachycephalosaurus butt heads, and are not seen again for the rest of the film. No terms are used to describe them.

In The Land Before Time V: The Mysterious Island, Pachycephalosaurus begin to appear in crowd shots taking place in the Great Valley, and depictions of them as savages are halted. In The Land Before Time XI: Invasion of the Tinysauruses in particular, wherein the end credits tag the genus with the term "bonehead", a Pachycephalosaurus partakes in the plan to hunt down the Tinysauruses after Littlefoot blames them for the Tree Sweet Tree's leaves all being eaten before Nibbling Day.

Pachycephalosaurus also prominently appear in the television series, where, though they themselves are not given descriptive terms, fellow pachycephalosaurs Stegoceras are referred to as "domeheads".

Pachycepahlosaurus pair in the background. 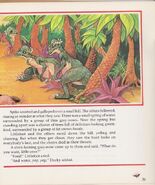 Pachycephalosaurus in The Land Before Time V: The Mysterious Island