Littlefoot's Mother (also known as Mama Longneck, as she is referred to as by fans,[1]), voiced by Helen Shaver, is a character in The Land Before Time film series. She is an Apatosaurus; one of many sauropods referred to as "Longneck" in the franchise, and the late mother of the main protagonist, the late wife of his father, and the late daughter of Grandma and Grandpa Longneck. She (like her parents but unlike most of the dinosaurs in the first Land Before Time movie) is not bigoted towards other species, although she will generally avoid those of other species because things have been done that way for a long time.

She plays a major role only in the original film, during which she is killed by the original Sharptooth (the scene for which the character is most famous), but she is referenced several times in later films, and is seen in a flashback once.

She is one of the wisest and most enlightened of all the dinosaurs (although not quite to the extent of her son); however she tends to accept the fact that a lot of the dinosaur herds tend to be segregated. Even she does not understand why this is so; all she can tell her son is that "it's always been that way." When the only other child around at that time - Cera - is not allowed to play with Littlefoot because he is a longneck and Cera a Threehorn, Littlefoot's mother comforts him by telling him that in the Great Valley "there will be many, many longnecks for you to play with". However, the fact that she saves both Littlefoot and Cera from Sharptooth shows that she is willing to abandon racial taboos.

At the time of her son's birth, the land suffers geologic and ecologic upheavals that include drought, flooding, famine, predation, and earthquakes. Determined not to let her son grow up in such an environment, she leads her herd in search of the Great Valley. She describes it to her son as "a wonderful, beautiful place" with green food, "more than you could ever eat, and fresh, cool water, more than you could ever drink." She has no proof that the Great Valley even exists, but is guided by her belief that "some things you see with your eyes, while others you see with your heart".

She is also a gentle soul who bears neither resentment nor fear of dying, choosing instead to pass calmly and peacefully while saying a final goodbye to her son.

Littlefoot is the only son of Mama Longneck. As shown in the beginning of the movie, she had laid several eggs, but all except the one Littlefoot hatched from were broken. She is shown to be a very loving mother to her only son. When Littlefoot's egg is snatched by an Egg Stealer, Littlefoot's Mother attacks the Egg Stealer, causing him to drop the egg into the river. When the egg rolls down onto dry land, and hatches, she and Grandma and Grandpa Longneck come down to where it has landed. Mama Longneck then licks her son lovingly, and when he shows fear of several small creatures who are congratulating his family, she lifts him up and put him on her back.

When Littlefoot grows older, she tells him all she had heard about the Great Valley, and how she plans to take him there, as it will be safe from predators and abundant in food and water. She also warns Littlefoot, after Cera's father tells Littlefoot to stay away from his daughter, that the species tend to be segregated.

Her husband was Bron, a brown-colored longneck who first appears in the tenth film. The two loved each other very much, and Mama Longneck named their son after Bron's childhood nickname. Littlefoot's mother is the daughter of Grandpa and Grandma Longneck, as Bron refers to Grandpa Longneck as "Papa Longneck" instead of "Father," and she was revealed to be their daughter in a book of the first movie. She also has the same under markings as her mother.

The canonical death of the parent occurs late one night near dawn when she dies protecting Littlefoot and Cera from Sharptooth. She puts up a tremendous fight and casts him into the "big underground," the bottom of a Grand Canyon-like gorge that has just been torn open by a tremendous earthquake. However, Sharptooth is not dead, and even this fleeting victory costs Littlefoot's mother her life as Sharptooth has bitten a large chunk of flesh out of her back during a time when she was off her guard, and gashed her back in their fight (implying that she may have died from blood loss). However, the earthquake may have contributed to her death, or even outright caused it instead.

With her last breath and her last words, she tells her son to search for the Great Valley and that she will be with him, even if he can't see her. Later, her spirit would appear to her son in times of need and aids him in the quest for the Great Valley. Her death would later be avenged when Littlefoot and his new-found friends (after several encounters) killed Sharptooth once and for all. Her last appearance is at the end of the first film when Littlefoot despairs of ever finding the Great Valley; she takes to the form of a longneck-shaped cloud to guide him into the Great Valley, whereupon a beam of light comes from her heart. The light shines on Littlefoot and spreads to illuminate the Great Valley below, there Littlefoot would be reunited with his Grandparents. With the Sharptooth dead and her son back in the care of his remaining family (her parents) in a new safe home, Littlefoot's mother finally achieved all she wanted for her son and thus was free to rest in peace.

Steven Spielberg and George Lucas were worried that some of the scenes in the original movie, especially the fight sequence between Littlefoot's Mother and the Sharptooth, and her resulting death, would be too frightening or even psychologically-damaging to young children. Her death was originally going to be one of the scenes that were cut from the original footage, until it was realized that this would bring problems in explaining why Littlefoot would have to venture on his own to the Great Valley. The producers decided to call in several psychologists to examine the scenes, and give their feedback. It was then decided that the scene would stay, but that the character of Rooter would be added in a later scene to soften the emotional blow of Littlefoot's Mother's death.[2]

The critics and reviewers of The Land Before Time were quick to notice the resemblance between the concepts of Littlefoot's Mother's death, and that of the main character's mother in the Disney movie Bambi,[3][4][5] although Washington Post staff writer Hal Hinson remarked with some disdain upon the way a character was used, in this instance, "to address the issue in an instructive manner."[6] Steve Rhodes, on Internet Movie Database, wrote that he thought the character's death, as well as the other perilous sequences surrounding the scene, was treated gingerly, and with respect for children.[7] In his review, Roger Ebert mistook both of Littlefoot's parents to die in the film,[8] although Bron, Littlefoot's father, made no appearance until The Land Before Time X: The Great Longneck Migration.

Littlefoot: [see her injured from the fight] Mother! Mother?

Littlefoot: Please get up.

Littlefoot's Mother: [weakly] I'm... not sure I can, Littlefoot.

Littlefoot: Yes you can. Get up.

Littlefoot's Mother: [tries to get up, but falls back down due to her injuries] Dear sweet Littlefoot, do you remember... the way to the Great Valley?

Littlefoot: [sniffs] I guess so. But why do I have to know? You’re going to be with me.

Littlefoot's Mother: [mentions her spirit as camera slowly zooms out] I'll be with you, even if you can't see me.

Littlefoot: [confused] What do you mean if I can't see you? I can always see you.

Littlefoot's Mother: [with her last spoken words] Littlefoot, let your heart guide you. It whispers, so listen closely. [dies]

[With her last words, Littlefoot's Mother remains mute as she dies from her injuries. Whispering Winds continue playing. Camera moves into the rainy sky.]

A reference sheet for Littlefoot's mother. She is titled "Mama Apatosaurus".

Littlefoot's mother tells him how to reach the Great Valley, just before her death 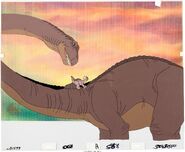