The following is a list of the villains in The Land Before Time franchise.

"Sharptooth" is the term in the series used to describe predators; though most are simply hungry animals looking for food (and do not fall under the umbrella of proper villains as a result), there are a select few sharpteeth that qualify as proper villains.

In the film, Sharptooth is a normal animal who attacks the main characters out of hunger, and does not qualify as a villain as a result; in The Land Before Time: The Illustrated Story, however, he is portrayed as an evil, vain character, his motivation for hunting down the children lying in his desire to get back at Littlefoot for damaging his eye. Even beyond his desire for revenge, The Illustrated Story describes how he attacks the children with "evil glee" in his first encounter with Littlefoot and Cera, and that, when he nears the Great Valley in the kids' last fight against the tyrannosaur, he sniffs the air "with evil joy" as he finds the valley's entrance.

Red Claw is a villainous male Tyrannosaurus rex (Sharptooth) who has a distinctive scar that goes through his left eye, down to his left hand and claw. Land of the Lost had a Tyrannosaurus that was similar to Red Claw, named Scarface, who had a big scar down the right side of his face. Red Claw is the prominent antagonist in the TV series. According to Chomper and Ruby, Red Claw is the biggest and meanest Sharptooth of all. Voiced by Pete Sepenuk.

According to legend, this Sharptooth was one of the largest and most vicious Sharpteeth ever known. It attempted to attack a herd of Longnecks (Brachiosaurus), but was defeated by Doc, the Lone Dinosaur, who killed it after a long battle by knocking it off a cliff. It is said that the "stone teeth" around the neck of Saurus Rock originate from this Sharptooth.

Screech and Thud are Red Claw's henchmen that are deinonychuses. Chomper and Ruby have said that Red Claw is always nearby whenever these two are about.

Ozzy and Strut are two Struthiomimus brothers who entered the Great Valley in hopes of stealing eggs, though the more relaxed Strut was willing to eat plants.

He is a Pteranodon, called a Flyer in the films and TV series, and is Petrie's uncle. He is also Petrie's mother's brother. Though he is ambitions and can be arrogant, in the end he is shown to have changed his ways and learns to care for others, rescuing Ducky from falling from a cliff during a volcanic eruption.

Rinkus and Sierra are Pterano's henchmen. At first they were his friends, but time proves that they are far more sinister than he is, and very willing to dispose of him in order to reach their own goals.

The Nightmare Longneck (also known as The Longneck Monster) is a dragon-like longneck who tried to hurt Chomper during a nightmare happening.

The Nightmare Dragon is a dragon who appears in a nightmare as it was blasting fire at Cera and chasing her but then The Dragon disappeared after Cera says that she is not a scaredy-egg.

Ozzy and Strut's defeat. It is unknown if they survived.

Rinkus and Sierra's defeat. It is unknown if they survived.

Red Claw's defeat
Add a photo to this gallery 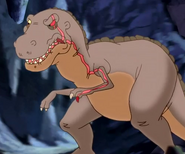 Nightmare Dragon
Add a photo to this gallery
Retrieved from "https://landbeforetime.fandom.com/wiki/List_of_villains_in_The_Land_Before_Time?oldid=178893"
Community content is available under CC-BY-SA unless otherwise noted.