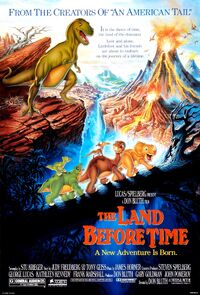 In the film that started it all, an earthquake separates the main characters from their families, and they set off to reunite with them as they embark on an adventure to the Great Valley. They face dangers such as starvation, Sharptooth, and splitting up.

The Land Before Time II: The Great Valley Adventure (1994) 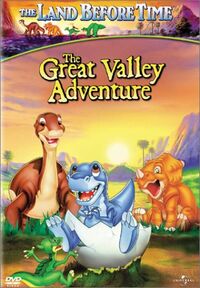 Soon after arriving in the Great Valley, the little dinosaurs chase some Egg Stealers into the Mysterious Beyond and discover an egg, mistakenly believing it was Ducky's unhatched sibling who had been stolen, from which a sharptooth hatches. They call him Chomper, and all is well until he gets interested in Cera's tail and bites it. To add to the trouble, the Egg Stealers are out for revenge, and a hole is now in the Great Wall, giving the young sharptooth's mother and father the opportunity to find their son...

The Land Before Time III: The Time of the Great Giving (1995) 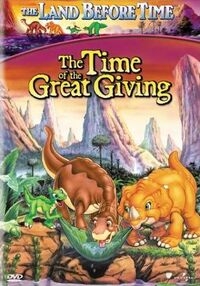 The gang is in some trouble with bullies, but then a much bigger problem appears. The The Thundering Falls stop and the valley starts drying out. To make things even worse (for the main characters) Cera's grouchy but well-meaning father bans her from playing with Littlefoot and his other friends, and a new hazard strikes the Great Valley during a storm, which in turn causes a forest fire.

The Land Before Time IV: Journey through the Mists (1996) 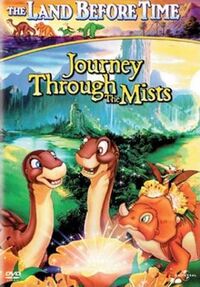 A herd of farwalker Longnecks visits the Valley, telling that their homeland was transformed into the Land of Mists. Grandpa Longneck then becomes mortally ill and Littlefoot, along with a young longneck from the herd named Ali, sets out to find the cure: the Night Flower, which grows in...The Land of Mists! Littlefoot goes on an adventure with Ali, except Ali is afraid of his friends...but things change when she must find help to save Littlefoot and save his grandpa! During the journey, Littlefoot's friends follow them, while they are being watched by two clever carnivores.

The Land Before Time V: The Mysterious Island (1997) 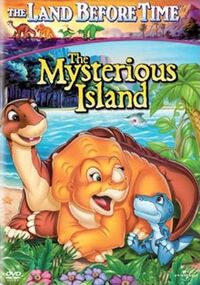 Swarming Leaf Gobblers (The Mysterious Island)s appear and eat all of the green food in the Great Valley, forcing the herds to leave. The gang set out to find green food so their herds will not break up after a disagreement. While doing so, they wind up on an island and meet a friend they have not seen in a while: Chomper! But his parents live there as well, as well as another sharptooth even more dangerous than them...

The Land Before Time VI: The Secret of Saurus Rock (1998) 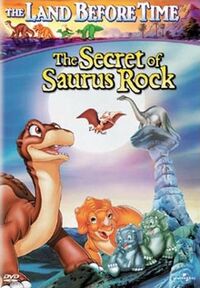 A large longneck named Doc appears in the valley, and Littlefoot believes him to be the Lone Dinosaur of legend. Later, Littlefoot and his friends are attacked by a sharptooth, and accidentally break off one of the stone teeth of Saurus Rock when searching for Cera's niece and nephew, who cause trouble for Cera! They are also attacked by the sharptooth again, and it seemingly dies trying to eat them.

As told in the legend, bad luck seems to descend upon the Valley. Unfortunately, the adults blame Doc! Littlefoot denies that Doc is responsible, and goes off on his own to save everyone from the bad luck by getting a new tooth from the dead Allosaurus. However, it turns out to be alive! And after briefly escaping it, he is attacked by another one!

This movie was the last before a break in the then-yearly release schedule of the films, with a two year gap being present between the sixth and seventh films. 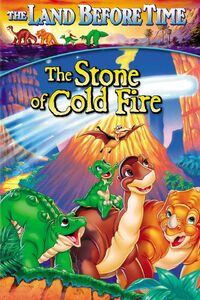 Littlefoot sees a strange flying rock one night while everyone is sleeping. The valley has some visitors, among them Petrie's uncle Pterano and some Rainbow Faces that seem to talk in riddles and explain that the rock may be a "Stone of Cold Fire". Ducky is taken captive by Pterano and his henchmen and the gang set out to save her from her captors who have set out to capture the stone of cold fire for themselves. 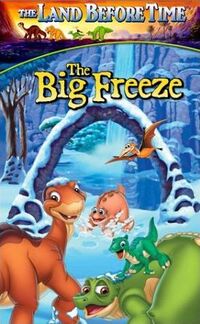 Some Spiketail far walkers visit the Great Valley, and during their visit snow falls upon the Valley. Spike, who has befriended, Tippy, goes with the Spiketails. Ducky sets out to bring Spike back and the gang set out to save Ducky. Meanwhile, Mr. Thicknose seeks trouble upon Littlefoot, and spills a deep secret, all while a sharptooth follows them. 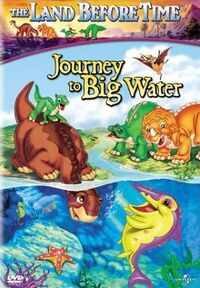 During a bad rainy season more rain than usual falls upon the Great Valley, so much that it floods part of it. Littlefoot meets a happy, funny talking little ichthyosaur named Mo, but also a huge swimming sharptooth. An earthshake traps the gang and they go on a journey to get home - returning their new friend on the way. Meanwhile, Cera is an annoyed with Mo, who doesn't want to be serious.

The Land Before Time X: The Great Longneck Migration (2003) 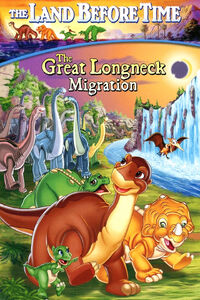 Littlefoot has odd sleepstories one night. He finds out his grandparents have also and it means they must set out and travel to a destination they have not seen. His friends set out after he has left to catch up, and face a prehistoric crocodile and a vicious sharptooth. But a surprise is in store for Littlefoot once he reaches their destination - he has a father! Also, Littlefoot is bullied by a lonely kid his age. Meanwhile, the others meet an old longneck named Pat, and when they find Littlefoot, they accidentally bring a lot of sharpteeth with them...

The Land Before Time XI: Invasion of the Tinysauruses (2005) 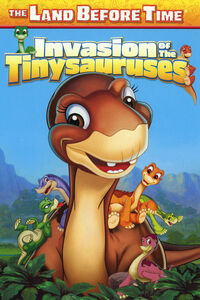 It is almost time for the Great Valley herd to eat the special tree sweets that bloom only once a year. Littlefoot accidentally knocks them down and soon after some little Longnecks eat them. Littlefoot blames the little ones for the disappearance of the tree sweets, but soon after makes friends with them. He must make a difficult decision: should he continue to blame them for what he did? Or should he admit that he lied? Meanwhile, Cera's father falls in love with an old friend, Tria, but does Cera agree with having a new mother?

The Land Before Time XII: The Great Day of the Flyers (2006) 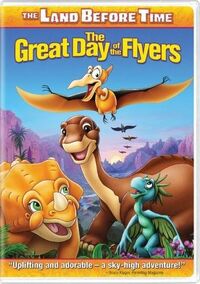 It is an important time for Petrie, and possibly emotional time showing he can fly with his family. Also Cera learns some news concerning her family: a new baby, Tricia! While this occurs they also meet a new friend, Guido, but what is he? No one knows...not even him! And when he goes sleep walking one night, the gang has to protect him, but when they lose sight of him, Guido wakes up on top of a sharptooth!

The Land Before Time XIII: The Wisdom of Friends (2007) 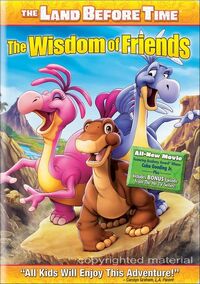 Some goofy Yellow Bellies, Loofah, Doofah, and Foobie appear in the Great Valley. They are trying to find their way to Berry Valley, and so, the gang sets out to help them find their way there. Littlefoot also tries to teach them the Wisdoms, while four Sharpteeth follow them.

This movie loathed by fans, and was responsible for a near decade-long hiatus. 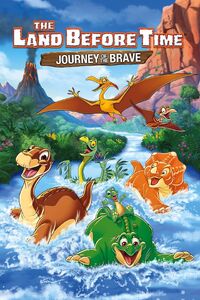 Littlefoot's father Bron fails to arrive with his herd. Soon, word gets out that he is trapped in the Mysterious Beyond, urging the gang to set out on a quest to save him. Along the way, they encounter a dangerous new type of sharptooth, and Littlefoot splits from the others after an argument.

When they realize the gang is gone, Grandpa Longneck, Daddy Topps, and Wild Arms go out to find them, while Chomper and Ruby follow. Littlefoot meets a Pteranodon named Etta, and his friends encounter a tribe of Diggers, as well as another sharptooth, and soon they eventually find his father. But can they save him?

Retrieved from "https://landbeforetime.fandom.com/wiki/List_of_The_Land_Before_Time_movies?oldid=193916"
Community content is available under CC-BY-SA unless otherwise noted.