Lambeosaurus was a crested, duck-billed dinosaur. Its forward-leaning, hollow, bony crest was as big or bigger than the rest of its skull and may have been used to produce sounds, enhance its sense of smell, and/or used in courtship displays. These types of dinosaurs were of the same hadrosaur type as some of the other types who lived near water. Scientists think it lived around North America around 76-75 million years ago.

Lambeosaurus, best known through L. lambei, was quite similar to the more well-known Corythosaurus in everything but the form of the head frill. Compared to Corythosaurus, the crest of Lambeosaurus was shifted forward, and the hollow nasal passages were at the front of the crest and stacked vertically.[1] It also can be told apart from Corythosaurus by its lack of forking nasal processes making up part of the sides of the crest, which is the only way to tell juveniles of the two genera apart: the crests took on their unique forms as the animals aged.[2]

In build, Lambeosaurus was like most hadrosaurids, and could move on both two legs and all fours, as shown by footprints of related animals. It had a long, stiff tail that kept it from drooping. The hands had four fingers, lacking the innermost finger of the generalized five-fingered tetrapod hand, while the second, third, and fourth fingers were bunched together and bore hooves, suggesting the animal could use the hands for support. The fifth finger was free and could be used to manipulate objects. Each foot had just the three central toes.[3]

The most unique feature, the crest, was different in the two well-known species. In L. lambei, it was taller, narrower, more rectangular, and had a secondary point raising backwards and was a bit shorter and more rounded in females.[1] In L. magnicristatus, the crest was more rounded with no secondary point, but was strikingly big and pointed a bit forwards.[4][5] In the lesser-known species "L." laticaudus and L. paucidens the crest is not yet known, but "L." laticaudus can be known by its great size and the tall form of its tail.[3]

Lambeosaurus is the type genus of the Lambeosaurinae, the subfamily of hadrosaurids that had hollow skull crests. Among the lambeosaurines, it is closely related to Corythosaurus and Hypacrosaurus, with little separating them but crest form.[3] The relationships among these dinosaur genera are hard to pick out. Internet classifications sometimes include all three in the tribe Lambeosaurini, but such a tribe has not been formally defined. Instead, the equivalent clade Corythosaurini has been adopted in publications, including David Evans and Robert Reisz's redescription of L. magnicristatus. This examination indicated that Lambeosaurus is the sister taxon to a clade made up of Corythosaurus, Hypacrosaurus, and the Russian genus Olorotitan; these lambeosaurines, with Nipponosaurus, make up Corythosaurini.[3]

Lambeosaurus was named by Dr. William A. Parks in 1923 to honor Lawrence Lambe, an early Canadian fossil hunter. Many fossils have been found in North America, including Montana (USA), Baja California (Mexico), and Alberta (Canada).

As a hadrosaurid, Lambeosaurus was a large bipedal/quadrupedal herbivore, eating plants with an advanced skull that let it grind like mammals chew. Its teeth were replaced all the time and were packed into dental batteries that each had more than 100 teeth, a few of which were in use at a time. It used its beak to crop plants, which were hel in the jaws by a cheek-like organ. It would have fed from the ground up to around 13 ft above.[3] As noted by Bob Bakker, lambeosaurines have narrower beaks than hadrosaurines, meaning that Lambeosaurus and its relatives could feed on what they liked.[6]

Like other lambeosaurines such as Parasaurolophus and Corythosaurus, Lambeosaurus had a unique crest on the top of its head. Its nasal cavity ran back through this crest, which made it mostly hollow. Many suggestions have been made for the function or functions of the crest, like to house salt glands, boost the sense of smell, use as a snorkel or air trap, make sounds, or to recognize one another.[7][8] Social functions such as noisemaking and recognition have become the most widely accepted of the various hypotheses.[3]

The large size of hadrosaurid eye sockets mean it had good sight and, proof that sight was important to these animals. The hadrosaurid sense of hearing seems to be strong to. There is at least one example, in the related Corythosaurus, of a slim ear bone in place, which mixed with a large space for an eardrum implies a sensitive middle ear. This means that the hearing part of the inner ear was well-developed.[7] If used to make noise, the crest could also have been different between species or sexes, because the differing layouts of the nasal passages corresponding to the different crest shapes would have made naturally different sounds.[9]

Lambeosaurus in The Land Before Time

Lambeosaurus is one of the many dinosaur genera to appear in The Land Before Time, being seen in various films and episodes as background characters. The adults are green and pale underbellies in color, while the babies are purple in color. 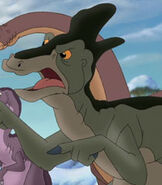 A small group of Lambeosaurus