Start a Wiki
This article or section is a stub. You can help Land Before Time Wiki by expanding it.

Flyer is the Land Before Time term for pterosaurs, and other flying creatures such as birds. The most widely depicted flyers in The Land Before Time are Petrie and his family. The adult flyers tend to be smaller than most adult dinosaurs, however they usually range in size around the smaller dinosaurs.

Most flyers are (incorrectly, in the case of pterosaurs) depicted as twofooters, though, in some very early films, they (particularly Petrie in the first two series installments) are depicted as faculative quadrupeds, much like many ornithopod dinosaurs.

Most flyers are herbivores or omnivores, but some, such as the "sharptooth flyer" that appears in The Land Before Time V: The Mysterious Island, are carnivores. 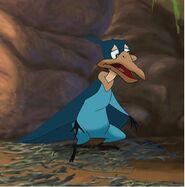 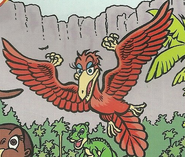 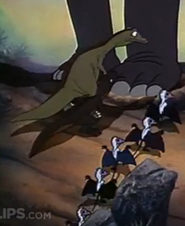 Dimorphodon in a line

Indeterminate pterosaurs, purple in color with teeth and Pteranodon-like crests 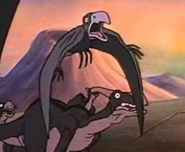 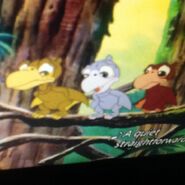 Campylognathoides (in the background, next to the Brachiosaurus)

A trio of flyers seen in the opening of The Land Before Time VII: The Stone of Cold Fire 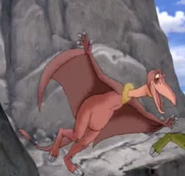