Ichthyostega and Acanthostega were the first amphibians but however this fish is older than amphibians. Eusthenopteron-Panderichthys-Tiktaalik-Acanthostega-Ichthyostega-Living Reptiles, Amphibians, Birds and Mammals including the non-avian dinosaurs and the non-Devonian amphibians.

Eusthenopteron is a genus of prehistoric sarcopterygian (often called lobe-finned fishes) which has attained an iconic status from its close relationships to tetrapods. Early depictions of this animal show it emerging onto land, however paleontologists now widely agree that it was a strictly aquatic animal. The genus Eusthenopteron is known from several species that lived during the Late Devonian period, about 385 million years ago. Eusthenopteron was first described by J. F. Whiteaves in 1881, as part of a large collection of fishes from Miguasha, Quebec . Some 2,000 Eusthenopteron specimens have been collected from Miguasha, one of which was the object of intensely detailed study and several papers from the 1940s to the 1990s by paleoichthyologist Erik Jarvik.

Anatomically, Eusthenopteron shares many unique features in common with the earliest known tetrapods. Largest individuals grew up to 1.8 m (6.5 ft) in length. It shares a similar pattern of skull rooting bones with forms such as Ichthyostega and Acanthostega. Eusthenopteron, like other tetrapodomorph fishes, had internal nostrils, (or a choana) which are found only in land animals and sarcopterygians. It also had labyrinthodont teeth, characterized by infolded enamel, which characterizes all of the earliest known tetrapods as well. Like other fish-like sarcopterygians, Eusthenopteron possessed a two-part cranium, which hinged at mid-length along an intracranial joint. Eusthenopteron's notoriety comes from the pattern of its fin endoskeleton, which bears a distinct humerus, ulna, and radius (in the fore-fin) and femur, tibia, and fibula (in the pelvic fin). These appendicular long bones had epiphyseal growth plates that allowed substantial longitudinal growth through endochondral ossification, as in tetrapod long bones. These six appendicular bones also occur in tetrapods and are a synapomorphy of a large clade of sarcopterygians, possibly Tetrapodomorpha (the humerus and femur are present in all sarcoptergyians). Similarly, its elasmoid scales lack superficial odontodes composed of dentine and enamel; this loss appears to be a synapomorphy with more crownward tetrapodomorphs.

Eusthenopteron appears multiple times throughout the series. They appear in the beginning The Land Before Time VIII: The Big Freeze, swimming nearby a Camptosaurus. One makes a cameo appearance in The Land Before Time IX: Journey to Big Water, where it jumps out of the water, a second makes a cameo appearance in The Land Before Time XII: The Great Day of the Flyers, where it is seen, again, jumping out of the water. Two schools are even seen later in the film during the song, Flip, Flap and Fly. Another makes a cameo appearance in the TV Series episode, The Star Day Celebration, where one is seen swimming around while Ruby is underwater. However, this creature did not live with the dinosaurs (or even reptiles for that matter). They are one of the few Swimming Sharpteeth that are harmless to dinosaurs. 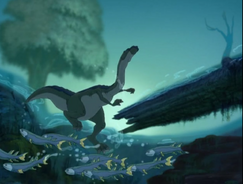 Retrieved from "https://landbeforetime.fandom.com/wiki/Eusthenopteron?oldid=96915"
Community content is available under CC-BY-SA unless otherwise noted.