Land Before Time Wiki
Register
Don't have an account?
Sign In
Advertisement
in: Pages that need serious work, Stub articles, Flyers,
and 8 more

Etta, voiced by Reba McEntire, is a character who appears in The Land Before Time XIV: Journey of the Brave. She is a Pteranodon, or "Flyer", and befriends Littlefoot and his friends during their search for Littlefoot's father, Bron.

Etta first appears after a "sand cloud" forces Littlefoot into a cave, and the mouth of the cave is blocked by sand, and later rocks. To cheer up the downtrodden Longneck, Etta tells Littlefoot to 'look for the light'; look for the positive in a negative situation. After a song number, she and Littlefoot hear sound from above the cave, coming from a skirmish between the rest of the Prehistoric Pals and a hostile Sharptooth. The dinosaurs (and pterosaurs) ride a river and use a waterfall to exit the cave opening, and make their way to the Fire Mountain; the location of Littlefoot's imperiled father, Bron. 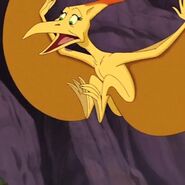 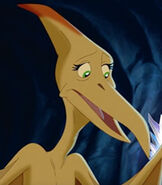 This article or section is a stub. You can help Land Before Time Wiki by expanding it.
Community content is available under CC-BY-SA unless otherwise noted.