Entelognathus ("Complete jaw") is a genus of placoderm from the Silurian period of China. It was discovered with a complete, functioning jaw, showing that modern jaws evolved much earlier than previously thought. This discovery has also changed the tree of life, as it is now believed that placoderms are closely related to bony fish and that the modern jaw first evolved in placoderms, not bony fish as previously thought.

An Entelognathus briefly appears in The Land Before Time: Preschool Adventure, where it is seen in the "Cera's Creature Categories" minigame as one of the creatures that Cera helps return home after a sky-fire shower. 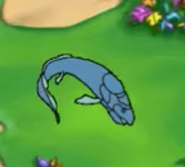 Entelognathus in The Land Before Time: Preschool Adventure.
Add a photo to this gallery
Retrieved from "https://landbeforetime.fandom.com/wiki/Entelognathus?oldid=203994"
Community content is available under CC-BY-SA unless otherwise noted.