Land Before Time Wiki
Register
Don't have an account?
Sign In
Advertisement
in: Stub articles, Twofooters, Swimmers,
and 27 more

Ducky and Spike have many siblings, there are at least 22 other young swimmers (male and female) or maybe even more. Although they look much like Ducky, they seem to lack her sense of adventure, preferring to stay at home with their Mother. Ever since Ducky introduced them to "our new brother, Spike" at the close of the first film, all the swimmers have happily accepted him as part of the family, even if they do not understand him as well as Ducky does. The total 14 came in two clutches, as in the first film; Ducky's nest contained about half a dozen eggs. Later, in the Great Valley Adventure, Ducky's parents are shown to have another nest, with about another half dozen or so. The film ended with the new clutch hatching. Later, in Journey of the Brave, Ducky's parents have another nest, with 8 more young hatchings.

Throughout the movies, Ducky's siblings have always appeared in more than dozen to which often have depleted in smaller numbers (this explanation is that they're most likely some place else since Ducky has other relatives residing in the Great Valley). If given an estimate Ducky most likely has about 24 (if one were to include Ducky making 25). However this variable is inconsistent as to number of other siblings missing from future films and so forth.

Ducky's siblings are seen near the start of the movie, hatching soon after Ducky. When Ducky is brought back to the nest, she kisses one of them. There are 7 of them, all green like Ducky, but varying in different shades. At the end of the movie, when the gang finds the Great Valley, Ducky introduces them to "our new brother, Spike". Although only 3 of them are seen at this time, it is possible that the others were somewhere else at the time.

The Land Before Time II: The Great Valley Adventure

Ducky's mom has laid 7 more eggs. 6 of the babies are seen at the end of the movie where they hatch. One of Ducky's new siblings joins Littlefoot and friends at the end to frollick and play. 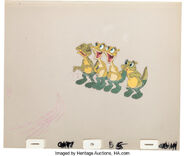 Cel of Ducky's siblings
This article or section is a stub. You can help Land Before Time Wiki by expanding it.
Community content is available under CC-BY-SA unless otherwise noted.