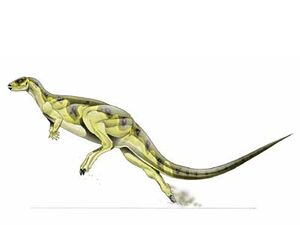 Dryosaurus ("Oak lizard") was a genus of iguanodontid ornithopod dinosaur from the Late Jurassic period of North America. It's name comes from the forested habitat of the creature (though it is often assumed to be due to the vague oak-like shape of its cheek teeth). It is believed that it had certain structures in its cheeks in an attempt to prevent food loss while the animal was eating. It is believed to be one of the fastest dinosaurs in its habitat, likely using its speed to evade predators.

A flock of Dryosaurus appear in the opening narration of The Land Before Time IV: Journey through the Mists, where they are seen being chased by a Tyrannosaurus

Dryosaurus in The Land Before Time IV: Journey through the Mists
Add a photo to this gallery
Retrieved from "https://landbeforetime.fandom.com/wiki/Dryosaurus?oldid=159526"
Community content is available under CC-BY-SA unless otherwise noted.