Although the Land Before Time character Ducky, together with her parents and biological siblings, is consistently identified in official material, including the official Land Before Time website,[1] as Parasaurolophus, there seems to have been much confusion over what species Ducky is, by critics, reviewers and fans alike.

Although described as a Parasaurolophus on the official Land Before Time website, fans have pointed out that the character Ducky is not drawn in a style correctly matching the estimated designs of Parasaurolophus. The character is drawn with a wide bill and a short, upright, pointed cranial crest, as are her siblings and her mother and father. Based on analysis of fossilized skulls, Parasaurolophus walkeri, for example, would have had a slender jawline and a long crest with slight curvature,[2] as would Parasaurolophus tubicen. While the third accepted species of Parasaurolophus, P. cyrtocristatus, had a much shorter crest than the other two species,[2] skull analysis shows that it still had a narrow jaw, and the crest had a downward, circular curvature.[2]

Due to these inconsistencies, fans and reviewers of the Land Before Time series have frequently pointed out that with Ducky's design, she better matches the description of a Saurolophus;[3][4][5][6][7][8][9][10] a genus of dinosaur once believed to have been closely related to Parasaurolophus, (with the name "Parasaurolophus" being based on "Saurolophus"[11]) because of the similarities in their appearance, although recently found out not to be directly related.[11] Fossilized skulls of Saurolophus show that its cranial crest was more spike-like in appearance, and appears to jut straight out of the back of the head. It was also significantly shorter than the crest of Parasaurolophus.[12] Ducky is actually referred to as a Saurolophus in the Land Before Time sing-along video and in some concept art for the original movie.[13]

This debate draws parallels to the confusion over the Velociraptor in the movie Jurassic Park, which are explicitly referred to as Velociraptor despite more closely resembling the larger Deinonychus.

Life restoration of the typical envisioning of Parasaurolophus, the type of dinosaur Ducky is officially identified as.

Life restoration of the genus Saurolophus, one of the dinosaur genera Ducky most resembles, and less commonly referred to as by official materials; it is the dinosaur she is most frequently interpreted as by fans.

Life restoration of the genus Edmontosaurus, or "Anatosaurus"; a dinosaurs which some early material correlating to the first movie labels her as.

Photograph of P. cyrtocristatus skull. Although the crest is short, it is very circularly curved, and rotates downwards. 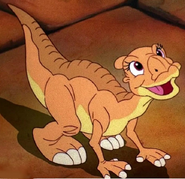 Screenshot of The Land Before Time character Ducky. The shortness of her crest and the broadness of her mouth is what has led many to believe she is a Saurolophus, rather than a Parasaurolophus. Her bill may have also sparked the assumptions that she is an Anatosaurus (or Edmontosaurus) although incidentally, her crest belies any resemblance to this genus.

Screenshot of Ducky's mother, who is also drawn with a crest and mouth more reminiscent of Saurolophus.

Parasaurolophus and members of Ducky's species alongside one another in the original The Land Before Time.
Add a photo to this gallery

Another genus Ducky has been mistakenly referred to as is Anatosaurus[14] (which was reassigned to the genus Edmontosaurus in 1979[15]). However, while the character is, as mentioned above, drawn with a long head-crest, which Edmontosaurus, or "Anatosaurus" is not believed to have had.[16]  In 2013 it was discovered that Edmontosaurus did have a fleshy crest on its head, similar to a rooster's comb, however it still did not resemble Ducky's crest. This misalign ment is most likely brought on by the broadness of the character's mouth, as (possibly) the most well-noted feature of Edmontosaurus is its broad bill.

Interestingly, while it is mostly fans who mistake Ducky to be a Saurolophus, critics seem to more often align the character to the genus Anatosaurus.[17][18][19][20] She has also been called an "Anatosaurus" in several books, including Jerry Beck's The Animated Movie Guide[21] and David Mansour's From Abba to Zoom: A Pop-Culture Encyclopedia of the Late 20th Century.[22] Ducky has also been called an "Anatosaurus" in one official Land Before Time activity book, and the original script for the first The Land Before Time refers to her and her family as Anatosaurus as well.

This article is a B-class article. You can help Land Before Time Wiki by giving it more of the necessary criteria.
Retrieved from "https://landbeforetime.fandom.com/wiki/Dispute_over_Ducky%27s_species?oldid=192848"
Community content is available under CC-BY-SA unless otherwise noted.