Deinonychus is a genus of maniraptoran dinosaurs similar in appearance to Velociraptor, though larger in size, though not as large as Utahraptor.

This 3.4 meter (11 ft) long dinosaur lived during the Early Cretaceous, about 115-108 million years ago. Fossils have been recovered from the U.S. states of Montana, Wyoming, and Oklahoma.

They had a large claw on each foot that they could use to attack their prey. Scientists think they may have hunted in packs, like lions and wolves. It's tail contained ligaments and tendons that could keep the tail stiff so it could use it as a counterbalance. Due to their leg muscles and structure they could be said to be good at jumping and running.

Paleontologist John Ostrom's study of Deinonychus in the late 1960s started the debate on whether dinosaurs were warm-blooded.[1] It is now accepted that all or most smaller theropods had feathers whose function was temperature regulation.

Ostrom noted the small body, sleek, horizontal, posture, and—especially—the enlarged claws on the feet, which suggested an active, agile predator.[2] Before this, the popular idea of dinosaurs had been one of plodding, reptilian giants.[3][4]

The species name antirrhopus means “counter balance”, which refers to Ostrom's idea about the function of the tail. As in other dromaeosaurids, the tail vertebrae have a series of ossified (bony) tendons and super-long bone processes. These features seemed to make the tail into a stiff counterbalance.

A fossil of the very closely related Velociraptor mongoliensis has an articulated tail skeleton that is curved laterally in a long S–shape. This suggests that, in life, the tail could swish to the sides with some flexibility.[5]

Deinonychus in The Land Before Time

Deinonychus are commonplace in entries of The Land Before Time series released after the turn of the century, first appearing in 2000's The Land Before Time VII: The Stone of Cold Fire and making common appearances afterwards. They are incorrectly portrayed as having two hand claws, instead of three, and, as with almost all of the other dromaeosaurs in the series, they are depicted without any sort of plumage.

In their debut in a flashback sequence in The Stone of Cold Fire, three individuals are seen attacking the herd that Pterano lead, during the events of the original film. It's not possible that most of the herd made it out of the ambush alive, although some could have escaped since some of the herd had weaponry to protect themselves.

In 2005's The Land Before Time XI: Invasion of the Tinysauruses, a pair of Deinonychus appear as threats during the film's climax. They chase the Tinysauruses through a cavern. Then the Tinysauruses hide in a rock pile and lose the raptors, which were heading for the Great Valley. When they reach the valley, they are first encountered by Littlefoot's friends, who are looking for him as they are apologizing for being mean to him.

The Deinonychus attack them and Littlefoot. As one goes after Cera, Tria saves her. Then Ducky is chased by the purple one and got hit by a branch swung by Littlefoot from behind a tree. The blue Deinonychus chases Spike & Petrie and first got pecked in the face and tickled by Lizzie and Skitter. The purple Deinonychus chases the others and confronted by his ability to strike by Tria plus Daddy Topps who showed up with bravery and courage and it got thrown off into the air. The blue one continues biting on Lizzie and Skitter but accidentally bit on the tail instead. Then the Tinysauruses jump on them, but are then thrown off. Daddy Topps confronts the Deinonychus, and then every member in the Great Valley comes and chases them away.

Outside of the films, Deinonychus is commonly portrayed in the television series; Screech and Thud in particular act as the secondary antagonists of the series, and as the subordinates of Red Claw. A trio of Deinonychus also appear in The Lonely Journey, and a mother Deinonychus appears in "The Great Egg Adventure".

Deinonychus are last seen in The Land Before Time XIII: The Wisdom of Friends, where an entire pack was being chased by a Tyrannosaurus.

Deinonychus from The Stone of Cold Fire

Deinonychus from Invasion of the Tinysauruses

Screech and Thud, a pair of prominent Deinonychus from the television series

A trio of Deinonychus from The Lonely Journey

Sharptooth Mom and her children, from The Great Egg Adventure 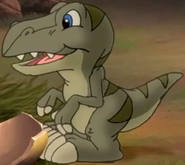 Add a photo to this gallery

Retrieved from "https://landbeforetime.fandom.com/wiki/Deinonychus?oldid=204585"
Community content is available under CC-BY-SA unless otherwise noted.