Coelophysis (pronounced SEL-oh-FY-sis or SEE-low-FY-sis) is an extinct genus of coelophysid theropod dinosaur that lived approximately 203 to 196 million years ago during the latter part of the Triassic Period in what is now the southwestern United States. It could grow about 3 meters (9 ft) long and 1 meter (3 ft) tall.

It is one of the earliest known dinosaur genera and the fossil record shows that while it lived during the Triassic, it was also present in the Early Jurassic Period. The type species, C. bauri, was described by Edward Drinker Cope in 1889, during what was known as the Bone Wars.

It is the official state fossil of New Mexico. 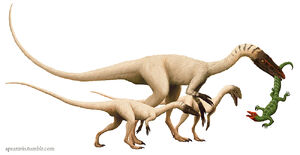 The Land Before Time Franchise

Coelophysis appears quite briefly in The Land Before Time VIII: The Big Freeze, during the opening of the film. The Coelophysis accidentally wakes up a Sharptooth by running over its snout, and is then attacked by the larger predator. However, it luckily escapes the peril and is not seen again.

Coelophysis as it appears in The Land Before Time VIII: The Big Freeze

Add a photo to this gallery
Retrieved from "https://landbeforetime.fandom.com/wiki/Coelophysis?oldid=209096"
Community content is available under CC-BY-SA unless otherwise noted.