Brachauchenius ("Short neck") is a genus of pliosaurid plesiosaur from the Late Cretaceous period of North America. It is one of the last of its kind, as most other varieties of pliosaur had gone extinct at the end of the Jurassic, with Kronosaurus being one of the few other exceptions. Similarly to its predecessors, Brachauchenius would likely have ate large marine reptiles, such as plesiosaurs, as well as larger varieties of fish.

A Brachauchenius briefly appears in The Land Before Time: Preschool Adventure, where it is seen in the minigame "Cera's Creature Categories" as one of the creatures that Cera helps return home after a sky-fire shower. 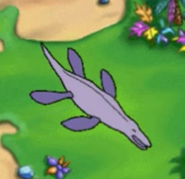 Brachauchenius in The Land Before Time: Preschool Adventure.
Add a photo to this gallery
Retrieved from "https://landbeforetime.fandom.com/wiki/Brachauchenius?oldid=203987"
Community content is available under CC-BY-SA unless otherwise noted.