Land Before Time Wiki
Register
Don't have an account?
Sign In
Advertisement
in: Featured Articles, Longnecks, Fourfooters,
and 12 more

The Land Before Time IV: Journey through the Mists
"The Brave Longneck Scheme"

She bears a striking resemblance to Littlefoot, (Ducky even comments when she first sees Ali, playing with Littlefoot, "Hey! There are two Littlefoots!") apart from her bright pink skin color and azure eyes. In the TV series, she has a more violet color of skin. She and her mother belong to a herd of Longnecks who are related to Littlefoot's maternal grandparents. Their old homeland was turned into a vast swamp due to flooding and excess rain. With their homeland now the Land of Mists, Ali's herd, led by the matriarch, the Old One, were forced to leave.

Ali's design is typical of Apatosaurus calves in The Land Before Time series. She is extremely similar to Littlefoot, the only traits beyond color differing between them being Ali's longer eyelashes and larger eyes. Her base skin tone is pink, layered in two different shades, and the underside of her belly is light peach. Her eyes are azure.

Role in the stories

Though fans began to despair of that promise ever being fulfilled, the "other story" remarked upon by the narrator is seen to be The Land Before Time TV series, when Ali returns with the herd in the episode, "The Brave Longneck Scheme." She has met a new friend, Rhett, after her herd had merged with his. Rhett tells Ali stories about how he protected his herd from Sharpteeth multiple times.

To demonstrate that Rhett's stories are false, the gang did an act of how the gang fled from Chomper a real sharptooth, so that Rhett scared fled exposing the lies of their stories, at which point Ali is confused when the gang laugh, so then Chomper apologizes for having scared her leaving her surprised to see that Littlefoot and her friends are friends of a sharptooth and just when the gang invited Ali to play with them, by the time Rhett returns with Old One and the pack, these they begin to chase Chomper and surround him on a dead end road but Ali along with Littlefoot and his friends arrive in time to tell them what happened and that Chomper is a friendly sharptooth, so Old One scolds Rhett about the stories he was counting and going with the pack and just when Rhett was going to retire, Ali along with the Littlefoot gang invite Rhett to play with them who accepts, ending the episode.

Like most dinosaurs outside of the Great Valley herd, Ali was wary of trusting dinosaurs outside of her species. She later explained that she had only ever gotten to know other longnecks because her herd moved around so frequently. When Littlefoot asked her to help him get to the Land of Mists, she said the others could not come; they would only slow them down as they did not know the way. It is uncertain whether or not this is the only reason, or if she was also afraid of having them present because of their difference. Nevertheless, once she saw how nice the others were, and how well they all could work together, she became open-minded to having inter-species friendships, and was the lead singer in the song "It Takes All Sorts."

Ali is portrayed as very kind and compassionate, as she is concerned when Grandpa Longneck becomes ill. She is also very brave; she risks her own life to save Cera when the latter falls into the rushing river, and Ichy and Dil are closing in on her. She is also shown on several occasions to be smart and quick-thinking, though in "The Brave Longneck Scheme," she is revealed to be gullible when Rhett convinces her that he is feared by Sharpteeth. Ali is also very calm, though when Littlefoot was trapped in the cave and Ali went back for help, she was visibly angered when Cera accused her of lying. In the episode "The Brave Longneck Scheme" she angrily accuses Littlefoot of jealousy when he and Cera do not believe Rhett's stories.

In The Land Before Time IV: Journey through the Mists, Ali is dark pink in color, somewhat similar to Littlefoot. In lighter scenes she is shown to be a distinctive bright pink. In the Television Series episode, "The Brave Longneck Scheme," she is darker and more purple in color.

Ali has become a popular character among fans, despite her limited appearances. Fanfiction often has Littlefoot and Ali fall in love and marry as adults;[1][2][3][4][5][6] others disagree, calling such a match incestuous on the grounds that they are cousins.[7]

Ali, with her mother.

Ali, (right) looking down at the Great Valley with Littlefoot.

Ali, meeting up with Littlefoot and Cera again. 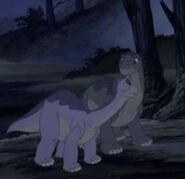 Ali sad after being rejected by Cera